From 2011 through 2015, information was gathered to support the claim that a small population of tigers (Panthera tigris) live in an approximately 4 to 7 square kilometer area in the Okhaldhunga district of Nepal. Interviews of local residents living in villages within the Okhaldhunga district were conducted.  Residents ranged in age from 9 to 90 years. Although the majority of villagers did not have formal educational training, all but three were successfully able to identify tigers from photographs shown.  Other species identified by villagers interviewed as living near personal residence or in the nearby jungle areas were leopards (Panthera pardus), clouded leopards (Pardofelis nebulosa), Asiatic black bears (Ursus thibetanus), barking deer (Muntiacus muntjak), and Nalgai antelope (Boselaphus tragocamellus).  Current literature states that tigers of Nepal currently only inhabitant areas in and around the protected area in the southern region of the country and at at altitudes below 1,700 meters.  Historic data on tigers in Nepal have tigers living in 3500m.  According to the oldest villager interviewed for our study, tigers have inhabitant the forests of he Okhaldhunga District for at least 30 years.  Ten of the villager's interviewed claimed to have had an encounter with one or more tigers between 2009 and 2015.  All but three of the interviewees were able to successfully identified tigers as the species they had encountered.  The three miss identified animals said to be tigers by these villagers were actually confirmed by them as leopards in photo line ups.

In addition to eye witness accounts of tigers occurring in the Okhaldhunga District, in 2012 we photographed one pugmark on the site where a domestic yak calf was found dead and had appeared to be killed by a large predatory cat. An eye witness to the attack stated that the animal was killed by a tiger.  We examined the remains of the freshly killed animal and noted that several bones had been severed during the act of feeding, which fell consistent with tiger feeding habits, and not leopards.  Three days following the kill, however, a leopard was observed feeding on the remains. Two additional pugmarks were discovered in 2013 those measurements match those of tigers. Scat samples were also measured which fell within the range of tiger standards during 2012 and 2013. 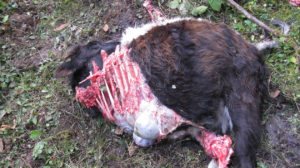