Between October 2011 and November 2015, we conducted field interviews and gathered biological data in Nepal's Okhaldhunga district covering many villages, including Ripal, Dhupisurke, and Taklung.  The area surveyed for tiger activity covered approximately 4 square kilometers.  The number of total human inhabitants live in approximately 700 households with the average number of five persons per house.  The age of the inhabitants ranges from approximately 95 years to new born children.  The average age of the head of household is approximately 45 years, fathering four to five children on average.  Each village consists of resident homes ranging from 15 to 30 homes, spread out over considerable distances.   The formal education for villagers raised in the area extends to “Class 8” and consist of rudimentary studies, preparatory for standardized Nepali testing.

Approximately 95% of those people interviewed had never seen photographs of tigers or other wild animal of the region prior to our meeting.  Knowledge of regional wildlife is gained through direct contact with individuals within a species and/or the guidance and descriptions made by family members or other villagers.

The questions asked of villagers were directed towards learning about any direct observations of tigers in the region. Hearsay, however, was also documented.  Villagers were asked to describe any predatory cats they encountered in the jungle or near their residence and to describe the circumstances under which they had the encountered the animal(s).  A majority of villager sightings occurred in the daylight hours under chance encounters, most notably by herders tending their cattle.  Other sightings took place at private residents, during the evening or overnight, where either a dog or young calf was being attacked by a predator.

Villagers interviewed were shown photographs of various large and small cats found throughout the world.  The reaction to the photographs shown to the interviewees were noted.  For example, when shown a photograph of a jaguar, all of the villager's interviewed looked closely at the photograph but none said it was a species they had observed.  A majority of those interviewed who said they had encountered a tiger, correctly identified a photographed tiger from photo lineups.  Only three individuals who stated they had observed tigers in the area had mistaken them for leopard.  This may have been due the use of words chosen by the interpreter to identify a tiger.  The formal word for tiger in Sherpa is Tak .  However, Jik (zeek) the Sherpa word for leopard, is sometimes used when referring to tigers by villagers.  The word Tak, was rarely used during our interviews.  The Nepali word for tiger, Bak.  When this term was used by the interpreters during our interviews, villager collectedly identified tigers. 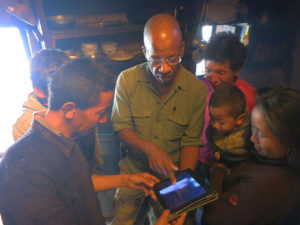